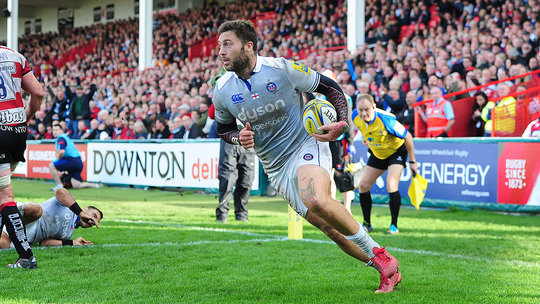 Bath Rugby fell short in their European Challenge Cup semi-final, as they lost 28-25 to Stade Francais on Sunday.

Jules Plisson kicked Stade Francais into an early 3-0 lead, as his penalty sailed through the posts in the fifth minute but Bath's George Ford levelled the score with a penalty of his own in the ninth minute.

With 11 minutes on the clock, the hosts scored the first try of the match when centre Geoffrey Doumayrou went over in the corner, but Plisson missed the conversion and the score stood at 8-3 in favour of the French.

Plisson did convert a second penalty six minutes later though and the score was extended to 11-3.

Ford kept Bath in the game with his second three-pointer, which came on minute 33, and it was a one-try game again at 11-6, which was the half-time score.

Stade Francais extended their lead seven minutes into the second half though when Plisson scored under the posts and added the extras.

In the 67th minute, Bath completed the comeback. Robbie Fruean scrambled his way over the whitewash, but Ford missed the difficult conversion and the score was level at 18-18.

The turnaround was officially done nine minutes from time when Fruean sent Elliott Stooke on his way and, when Ford knocked over the two points, Bath had a seven-point lead at 18-25.

Just as Bath looked to have maybe won it though, Stade Francais broke Blue, Black and White hearts.

Huge Pyle, three minutes before the end, found himself in space on the left-hand side and went over the line and Plisson levelled the scores with the conversion.

With one minute left, Plisson kicked a drop goal that made it 28-25 that sent the home fans into delirium.

Even after that though, Bath nearly sent the game to extra-time, as Ford had a last-gasp penalty, but the Leicester-bound fly-half missed his kick and Stade Francais progressed to the final.