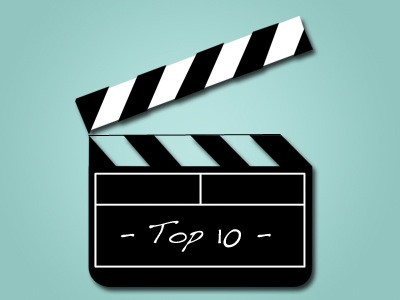 In honour of Father's Day on Sunday 21st of June, we've put together a selection of our all time favourite 'Dad' films.

So, pick out a movie, grab some popcorn and settle down for some quality time with Dad.

From golden oldies to modern classics we countdown our top 10:

This heart-warming Disney Pixar tale follows the story of a Clown Fish named Marlin who lives safe and secluded with his only son, Nemo. Fearful of the ocean and its unpredictable dangers, Marlin struggles to deal with his son growing up. Like all young fish, Nemo is eager to explore the mysterious reef but when he is unexpectedly taken far from home, Marlin finds himself the unlikely hero on an epic journey across the ocean to save his son.

After an encounter with a mysterious janitor Mike O'Donnell transforms into his 17 year-old self. Given the chance to re-live his youth, he re-enrolls in high school posing as exchange student Mark Gold. As he befriends his estranged children, Mike comes to believe that his mission is to help them and re-build his broken relationship with their mother.

Nineties classic Mrs Doubtfire follows the antics of a struggling voice actor who after losing a custody battle, disguises himself as a Scottish nanny so that he can spend time with his children. Robin Williams is fantastic as a devoted father, who longs for nothing more than having his family back.

4. Star Wars Episode V - The Empire Strikes Back (U)

In an attempt to convert Luke to the dark side, Darth Vader lures young Skywalker into a trap in the Cloud City of Bespin. In the midst of a fierce lightsaber duel with the Sith Lord, Luke faces the startling revelation that the evil Vader is in fact his father, Anakin Skywalker.

Hilarity and hijinks ensue in this iconic eighties flick when three bachelors from New York find themselves forced to take care of a baby left on their doorstep by one of the guy’s former flings.

Steve Martin plays the role of George Banks, a nervous father unready to face the fact that his little girl is now a woman, in this nineties remake of the Spencer Tracy classic. As George's soon-to-be-wed daughter Annie, prepares to head down the aisle plenty of comedy moments arise in the build up to the big day.

The sequel to the cult eighties classic follows Sam Flynn, who while investigating his Father's disappearance is unwittingly transported into a virtual reality called the Grid. After reuniting with his long lost father, the duo must stop the malevolent program CLU from invading the human world. Expect plenty of special effects and some familiar faces from the original film.

Real life Father and son Will and Jaden Smith star in this moving tale about a salesman from San Francisco who is left to raise his child on his own after his girlfriend walks out on him. With no steady income or anywhere to live the pair are forced to sleep rough on the streets while Smith's character Chris chases his dreams of becoming a stockbroker in New York.

Despite only being twelve years older than Harrison Ford, Sean Connery plays the role of Indie's dad in Steven Spielberg's 1989 American fantasy-adventure film Indiana Jones and the Last Crusade. After travelling the globe in search of the mysterious Holy Grail the father and son duo must fight off Nazis before the mythical object is discovered by Hitler and falls into the wrong hands.

This 1994 animated Disney blockbuster set in Africa shows the everlasting bond between a father and son. Scar leads Simba to believe he was to blame for his father's death, causing the young lion to flee the kingdom in shame. After years of exile he is persuaded to return home and claim the kingdom as his own thus completing the "Circle of Life".

These our some of our favourites but we'd love to here yours too! Make sure to comment your favourite Father's Day Film below.