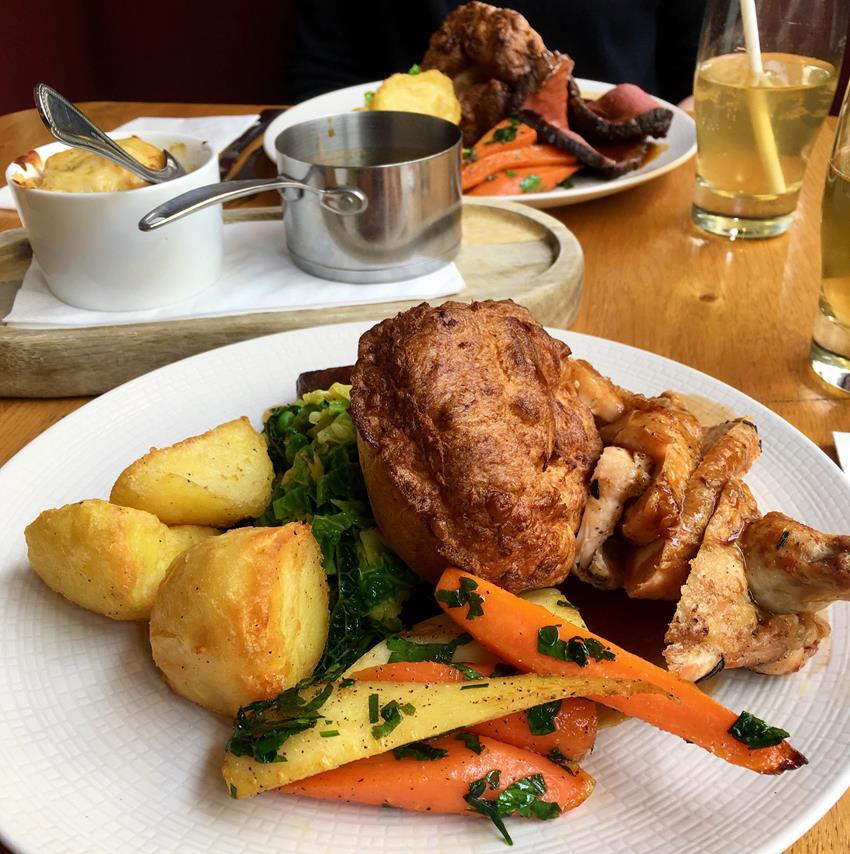 Our Digital Content Administrator, Katie, was kindly invited along to The Roman Baths Kitchen to try out their Sunday Lunch! Here’s how she got on…

Sitting in a prime location right next to the iconic Bath Abbey in the centre of the city, The Roman Baths Kitchen is the perfect place to stop off for lunch on whether your shopping, sightseeing, or simply looking for somewhere to eat out in Bath.

I decided to treat my mum and take her to try out the Sunday lunch with me. When we stepped into the restaurant we were hit with the lively atmosphere as we were warmly greeted and shown to our seats, which was a booth to my delight! Placed right next to a window it was the perfect spot to watch the world go by, while soaking up the beautiful surroundings.

After some deliberation we chose our starters; my mum opted for the mushroom soup, and I went for caramelised onion & stilton bruschetta. They swiftly arrived and looked just as appetizing as they sounded. My bruschetta was served warm with the melted stilton complimenting the onion perfectly, it came with a tasty pear salad which was colourful and fresh. The soup had a swirl of cream and came with bread and English butter and Mum finished every last drop, so it must’ve been just as flavoursome!

The starters were the ideal size to appetize us for our mains, we both selected a roast, my mum had the Slow Roast Lackham Beef and I had Free Range Chicken & Stuffing. I was pleased to see that the restaurant were using locally sourced West country produce, and once we tucked into our mains I could definitely taste the quality in every component.

The chicken was delicious and tender with a golden brown crispy skin, it was served with big, crisp Yorkshire pudding, fluffy duck fat roasties, cauliflower cheese, honey roast carrots and parsnips, seasonal greens and red wine jus. I was pleasantly surprised by the sweetness of the carrots which were perfectly seasoned along with the rest of the vegetables, and it was great that the gravy, applesauce and horseradish were served separately so we could use them according to our preferences.

The roasts were substantial size, but not enough to put us off desserts! After all, since the previous courses were so delicious, we couldn’t resist trying out another. After gazing at all the tasty desserts on offer, my mum chose the Rhubarb Crème Brûlée with Ginger shortbread, which I must say sounded very appealing, but I went for two scoops of raspberry sorbet – a light option suitable for when you’re feeling a bit on the full side!

The sorbet was to yearn for, deliciously sweet with a hint of sour, I could tell it was made with real raspberries which really enhanced the taste. Mum was equally impressed with her Crème Brûlée which had a rich custard and rhubarb base topped with a contrasting layer of hard caramel. 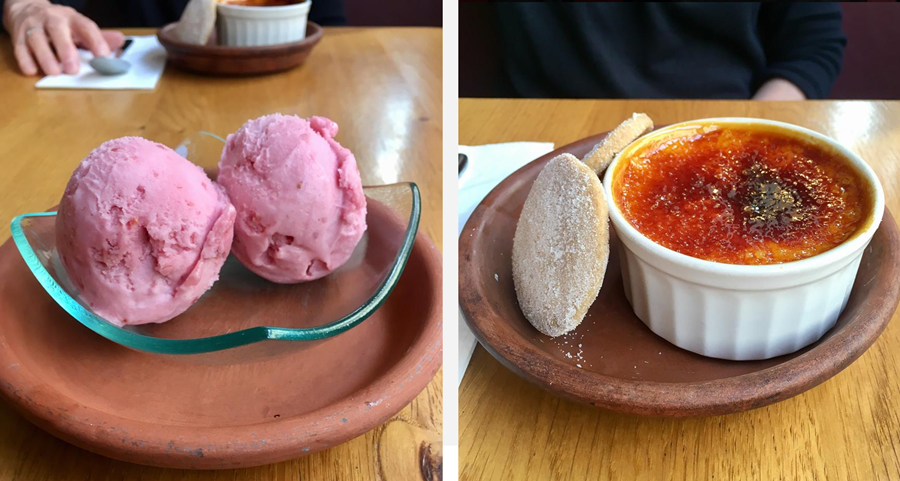 Sunday Lunch at The Roman Baths Kitchen made for the perfect way to spend an afternoon; quality food, friendly and attentive service, a warm atmosphere and great company! The bill came to just over £60, which I think is an extremely reasonable price for a 3-course lunch and drinks for 2 in Bath. So, if you’re looking to dine somewhere a bit fancier without breaking the bank, I’d certainly recommend paying The RBK a visit. There’s no doubt we’ll be back soon!

Craving a Sunday Lunch in Bath? Sunday's aren't complete without a roast dinner, and there are many restaurants in Bath ... 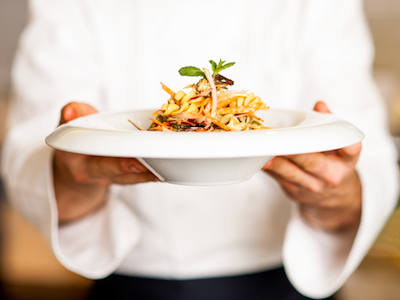 Here's our selection of Bath Restaurant Reviews; it's a tough job dining out at some of Bath's finest eateries...but somebody ... 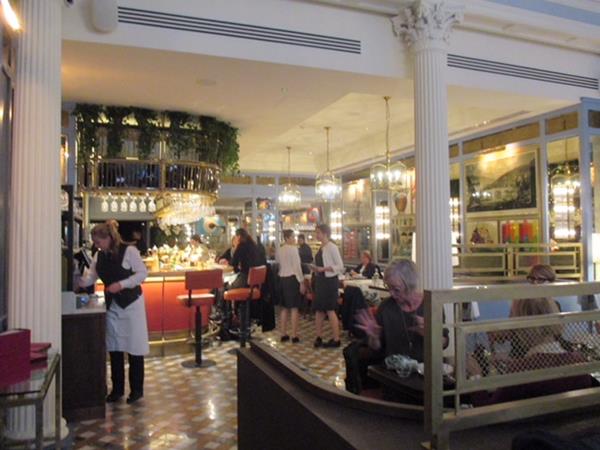 As I am on maternity leave from my company Total Guide to, I decided to spend the day in Bath ...

The luxury Royal Crescent Hotel in Bath is undoubtedly one of the world's very finest hotels. Built between 1767 and ... 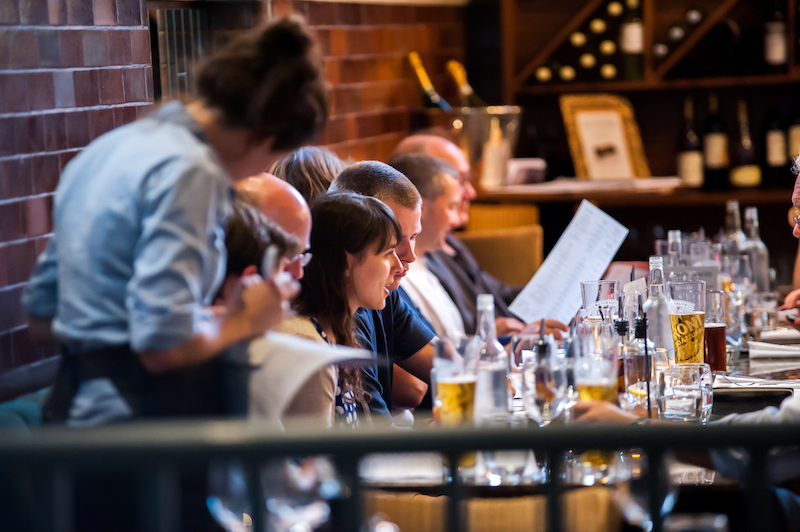 Eating out in Bath has got to be one of my favourite things to do. So when I was kindly ...

We were invited along to an class in liqueur making at Combe Grove, the perfect afternoon activity for anyone who’s ...

We sent our Business Development Manager, Hayley, to No.15 Great Pulteney so she could sample this gorgeous new hotel's afternoon ... 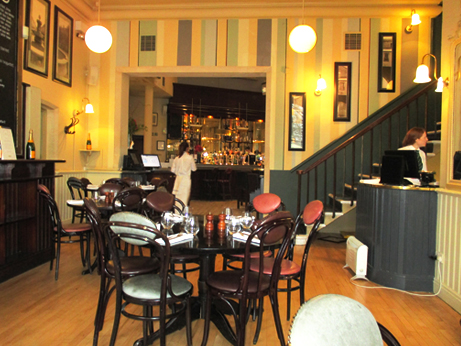 We took a trip right in to the heart of Bath to grab some lunch at Browns. Read on to ...

When it comes to holding a business event in Bath, we know that there are plenty of venues to choose ...

As Roman Baths Kitchen get ready to unveil their tempting Festive Menu, we were given the chance to come in ...