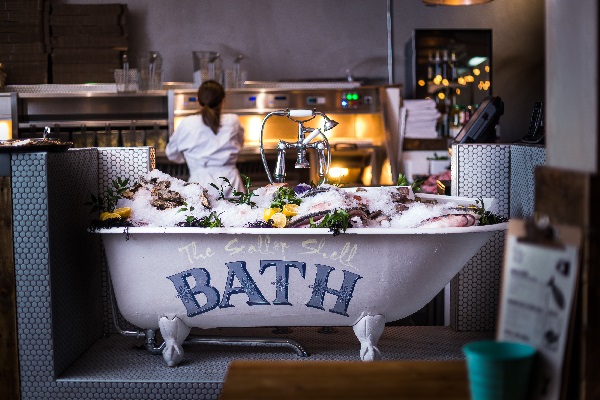 After winning 4 awards in as many months which include the UK’s Independent Fish and Chip Restaurant of the Year at the National Fish & Chip Awards, Best Bath Restaurant at the Bath Life Awards and Best Seafood and Fish and Chips at the Bath Good Food Awards, I had to go and see what all the fuss was about!

Situated in Bath’s rapidly developing Monmouth Street, The Scallop Shell’s quirky take on a nautical theme immediately draws you in and makes you feel like you’ve just entered a restaurant in Cornwall.

I loved that they haven’t gone over the top with the nautical décor; they’ve put their own stamp on it. It’s more of an industrial and fun nod to the seaside theme. With one of the main features being a bath tub filled to the brim with the days catch; everything is fresh and far removed from your average fish and chip shop! 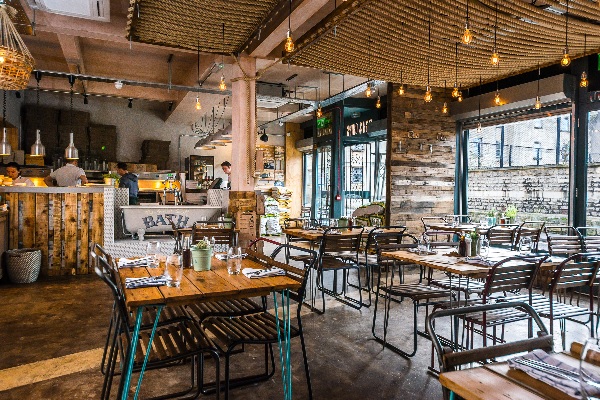 Although it was a Tuesday lunchtime, the restaurant was pleasantly busy with locals and tourists. The friendly waitress seated us and explained how the ordering system worked. Again, this is different to the norm and the paper menu has a tick boxes where you indicate your selections and hand over to the staff at the ordering counter.

The menu was certainly quality over quantity but even so, it was was still hard to choose as everything on there sounded delicious. I eventually opted for the calamari and my guest had the shell fish platter.

Given the prices and ingredients, we were amazed by the generous portion sizes. The shell fish platter had an enormous fresh scallop and several mussels, clams and prawns and my calamari could have been mistaken as a main. The flavours of these dishes were out of this world and the fresh fish was perfectly accentuated by the garlic, fresh parsley and lemon. The fish melted in your mouth and my guest very kindly let me share his Scallop which I have to say was the best Scallop I’ve ever tasted. 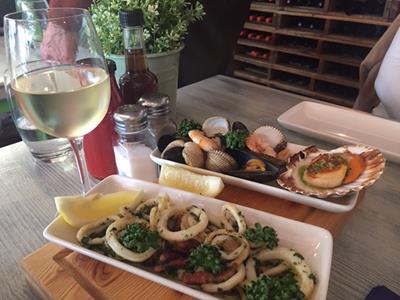 I’m glad I went for a non-battered option for the main as the starters were surprisingly filling. I had the Looe Hake Fillet with chips and my guest had to go for a battered option (it would have been rude not to!) and ordered the battered haddock and chips. We went the whole hog and both of us ordered mushy peas too.

I’ve never seen fish and chips presented so temptingly; the tartare sauce was neatly nestled next to the obligatory lemon wedge on a Scallop Shell with parsley and the mushy peas in a separate ceramic pot. Fish and Chips normally looks bland and like a sea of yellow but this attention to detail really added some colour and interest to the classic dishes.

The chips were thick and crispy but not at all greasy. The tartare sauce and the mushy peas both really stood out with unique flavours. They must have a secret ingredient as I’ve never tasted peas or tartare sauce like it. There was a subtle tanginess in both that accompanied the fish and chips perfectly. 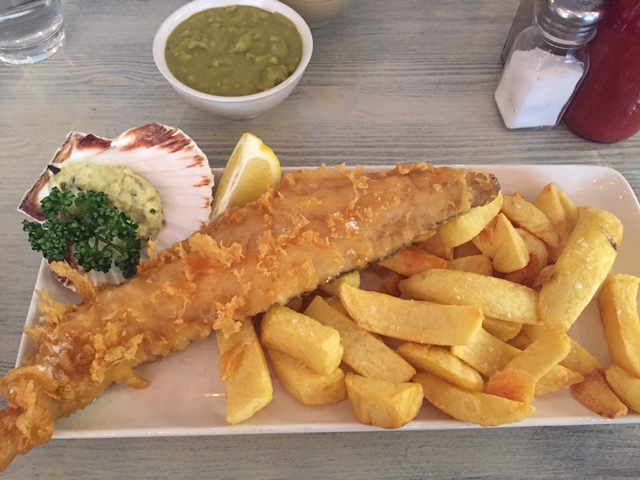 I can absolutely now understand why they have won 4 awards in as many months.  As soon as you walk in you can see that the family owned and run business has been created lovingly. The attention to detail right from the décor through to the condiments is outstanding.

My guest had already dined at The Scallop Shell and before we arrived he said it was his favourite restaurant in Bath which given the hundreds of restaurants is quite a statement. I couldn’t understand how a ‘chippy’ could be THAT good. But now I do and I completely share his opinion. Whether you’re visiting for a quick lunch, long relaxing evening meal with friends or having a takeaway. Well…you have to experience it to believe it! 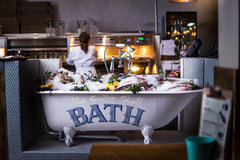 We've been speaking with the team at The Scallop Shell Bath, after their win at the Bath Good Food Awards 2016.